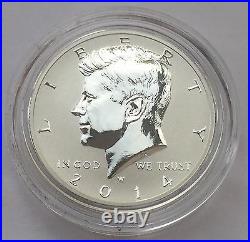 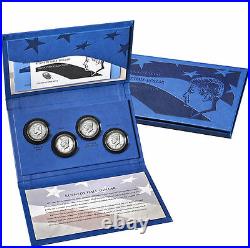 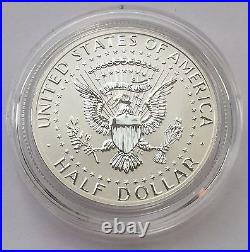 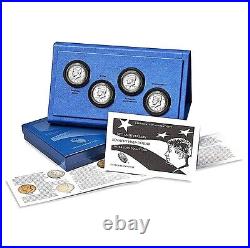 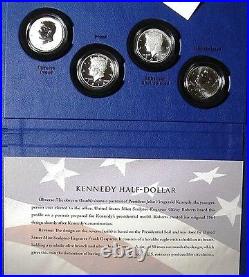 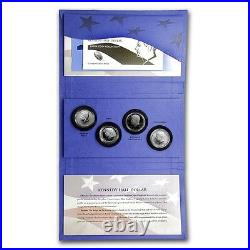 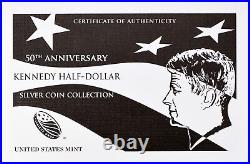 Anniversary Kennedy HalfDollar Silver Coin Collection includes four Kennedy halfdollar coins struck in 90% silver in four different finishes, one from each of the U. Mint’s coin production facilities. Something special for any collector or the perfect gift. This beautiful silver fourcoin set was designed to commemorate the 50. Anniversary of the Kennedy halfdollar first released in 1964. Each coin features the Kennedy portrait design on the obverse (heads) with the year 2014. The attractive packaging is designed to be displayable or stored and protected. The set includes four Kennedy halfdollar coins struck in 90% silver in four different finishes, one from each of the U. One reverse proof coin from the U. Mint at West Point. One proof coin from the U. One enhanced uncirculated coin from the U. Mint at San Francisco. This is a special wire brushing technique implemented in Philadelphia for the first time. The obverse in the areas of the effigy (portrait), lettering, and border will all receive a heavy laser frosting treatment. On the reverse, the lettering and border will each receive a heavy laser frosting treatment. Other elements of the eagle will receive a standard (moderate) laser frosting treatment to enhance certain artistic detail. The stars will receive a laser polish technique to accentuate them against the field. One uncirculated coin from the U. The rich embossed faux leather folder includes an image of John F. Kennedy from the halfdollar design struck on the coins in this set and some patriotic U. Mint logo appears on the front of the folder and the Department of Treasury seal on the back. Each set also contains a separate printed Certificate of Authenticity and booklet about the development and design of the Kennedy halfdollar inside the folder. The four coins with different finishes are encapsulated and secured in coin wells within the packaging. The coins appear from left to right inside the folder: reverse proof (West Point), proof (Philadelphia), enhanced uncirculated (San Francisco), and uncirculated (Denver). The coins are displayed to show all obverse (heads) sides. The back of each coin can be seen by removing the capsule from the packaging. The obverse and reverse design descriptions appear on the packaging. The designs on the coins replicate the portrait on the 1964 design: Obverse: The design shows a portrait of President John Fitzgerald Kennedy, the youngest person ever elected to the office. Mint SculptorEngraver Gilroy Roberts based this profile on a portrait prepared for Kennedy’s presidential medal. Roberts created his original 1964 design shortly after Kennedy’s assassination. Reverse: The design is based on the Presidential Seal and was done by U. Mint SculptorEngraver Frank Gasparro. It consists of a heraldic eagle with a shield on its breast, holding a symbolic olive branch and a bundle of 13 arrows. A ring of 50 stars surrounds the design, which gives this coin the distinction of having more stars than any other United States coin ever produced for circulation. NOW IS THE TIME TO MAKE YOUR INVESTMENT… TERMS OF SALE WHICH YOU MUST AGREE. ALL Payments are due at sale’s end. DO NOT MISS OUT ON THIS VERY SPECIAL ANNIVERSAY U. PLEASE CHECK OUT ALL OF OUR SALES & AUCTIONS. This item is in the category “Coins & Paper Money\Coins: US\Half Dollars\Kennedy (1964-Now)”. The seller is “david*sager” and is located in this country: US. This item can be shipped worldwide.