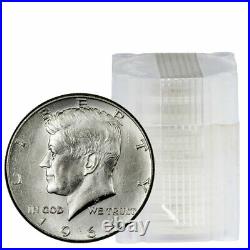 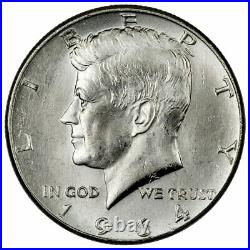 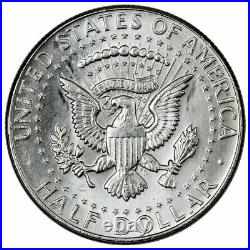 MCM Picks: Memorial Day. Roll of 20 – 90% Silver 1964 Kennedy Half Dollars BU SKU37127. Choice Brilliant Uncirculated 1964 Kennedy Half Dollar. The Kennedy half dollar was first struck by the US Mint in 1964 and these are from that year and in Choice Brilliant Uncirculated condition – even after 51 years. The design has not changed and is still used today, although there are few half dollars in this condition to be found anywhere. In 1963, following the assassination of President Kennedy, this coin was created to honor his service as the 35th President of the United States. Even today, John F. Kennedy is dearly remembered and is one of the most recognizable faces of United States history. 90% Silver Struck in 1964. In 1964, the US Mint decided to use 90% silver in this Kennedy half dollar. It ended up being the last year of the 90% circulation coinage in our US history. Each roll of these Kennedy half dollars contain over 7 Troy oz. However, in this condition and 51 years later, you would not want to cash them in for that today. Because they are uncirculated from that time period – makes them much more valuable than just the face denomination value. Kennedy Half Dollar Roll Packaging. Originally, these rolls from the mint would have been in paper rolls. While these plastic tubes are not impervious, they do provide a much greater level of protection than original paper rolls would have. The tubes do allow easy access to the coins and the top is re-screwable to secure them after inspections. The transparent aspect of the tube allows you to easily see the coins without removing them and thus keeping them better preserved. The 1964 Kennedy half dollar features an side view depiction of John F. Kennedy on the obverse. Coins in this uncirculated condition show no wear and you will see the fine details of President Kennedys hair, as well as his ear and facial features. This side of the coin has the inscriptions of: “LIBERTY, ” “IN GOD WE TRUST, ” and 1964. The presidential seal is displayed on the reverse side of these coins. The eagle is sporting a shield on its chest, holding arrows in his left claw and an olive branch in his right. Above the eagles head is a banner which reads “E PLURIBUS UNUM, ” which is the motto of the United States meaning out of many, one. Directly next to the banner is a collection of 13 stars – representing the original thirteen colonies. Surrounding the eagle is a complete circle made of 50 stars as well. This side of the coin bears the words “UNITED STATES OF AMERICA” and HALF DOLLAR. Specifications for this Roll of 20 – 90% Silver 1964 Kennedy Half Dollars BU SKU37127. We cannot make any price adjustments after the sale is complete. Product Photo Policy: MCM attempts to display product images shown on the site as accurately as possible. We take all of our photos in house and due to reflections on the mirrored or proof surfaces of a coin there may appear to be’black’ when there is not. If a coin has a color on it at all it will be described as’colorized’ in the description or title. Due to the large inventory we sell, we use stock photos. Serial numbers will vary from the image shown unless specifically stated in the product listing that the item pictured is the item you will receive. INTERNATIONAL ORDERS POLICY: We are accepting international orders from select countries. These charges are the customer’s responsibility. However, we cannot guarantee this due to the volume of orders we process each day. Beyond the 30-day return period, Company is under no obligation to accept return of any product, but may in its discretion do so pursuant to this policy, for up to one year from the invoice date. ModernCoinMart (MCM) was launched in 2004 and quickly set the standards for online sales of bullion, US coins and world coins. Join over 100,000 loyal customers and feel confident purchasing from a company that’s spent a decade building a solid and stellar reputation trusted and recognized around the world. That’s the MCM way. View more great items. 1909 S Indian Head Cent PCGS MS63 RD Red. $1,995.00. 1944 Silver Walking Liberty Half Dollar NGC MS65 Brown Label. This listing is currently undergoing maintenance, we apologise for any inconvenience caused. The item “Roll of 20 90% Silver 1964 Kennedy Half Dollars BU” is in sale since Friday, June 25, 2021. This item is in the category “Coins & Paper Money\Bullion\Silver\Coins”. The seller is “mcm” and is located in Sarasota, Florida. This item can be shipped worldwide.