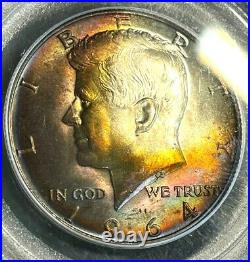 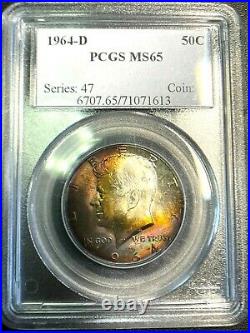 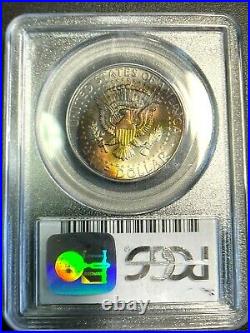 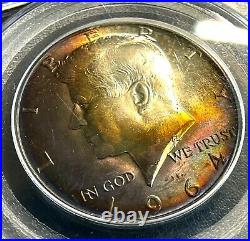 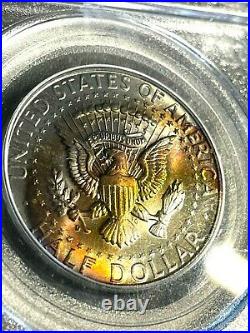 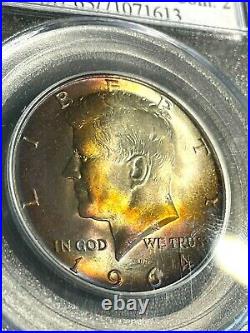 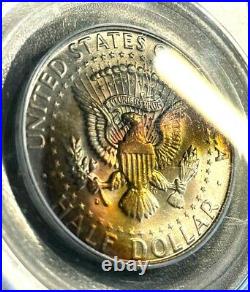 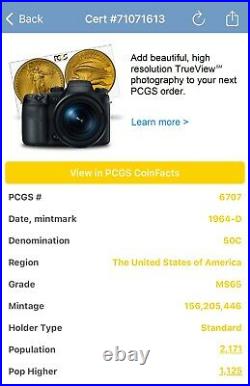 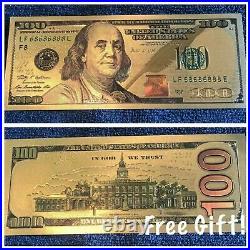 1964-D Kennedy Half Dollar PCGS MS-65 Dark Rainbow Colors! The Kennedy Half Dollar was approved by Congress and signed into law by President Lyndon B. Johnson on December 30, 1963 barely six weeks after the president was killed at the age of 46 during his motorcade procession in Dealey Plaza. The numismatic move wiped the bust of Founding Father Benjamin Franklin from the obverse of the half dollar, where he had been seen since 1948, and replaced by a JFK bust designed by then-Chief Engraver of the United States Mint Gilroy Roberts; the reverse was anchored with a depiction of the Seal of the President of the United States as designed by Sculptor-Engraver Frank Gasparro. So, what makes the 1964 Kennedy Half Dollar so popular? The answer is complex The nation was in collecting mourning over the assassination of Kennedy. The dashing young president and his photogenic family were loved by many globally. Even before his presidency, Kennedy had risen to fame through the political ranks as a Massachusetts State Representative, later Senator, and was known as a World War II hero who helped save his fellow crew on patrol torpedo boat PT-109 in 1942. He also authored the critically acclaimed 1956 book. Chronicling eight historic figures and their heroic stories. President Kennedys sudden death by lone shooter Lee Harvey Oswald stunned the nation in a fashion not seen since the attack on Pearl Harbor in 1941 or again until the 9/11 terror attacks in 2001. How Does a Coin Get Rainbow Toning? Rainbow Colored coins are in high demand as of late. Collectors are discovering that naturally Rainbow toned coins are a nice artistic addition to their coin collections! Toning on a coin adds additional value because of its stunning colors and uniqueness that each coin has. Collectors are paying high premiums for these beautiful coins! This particular 1964 quarter has a stunning Rainbow tone to it, especially on the obverse; which will continue to increase in color as the years go on. Coin looks better in hand and at an angle you can see the stunning Rainbow color. When trace amounts of sulfur or other chemicals come in contact with the surfaces of a silver coin over a period of years, the color and appearance of its surfaces will begin to slowly change. For example, the paper envelopes and canvas bags that were once used to store coins have often resulted in lovely toning after years of storage, especially in warm or slightly damp environments. The scratch on Kennedy’s nose is on the case and NOT the coin itself. You will get the exact coin pictured. Please check out my Store for other Great Deals! Failure to include this information may delay processing your return. The item “1964 D Kennedy Half Dollar PCGS MS65 Dark Rainbow Colors! LQQK” is in sale since Thursday, May 13, 2021. This item is in the category “Coins & Paper Money\Coins\ US\Half Dollars\Kennedy (1964-Now)”. The seller is “pokerfan74″ and is located in Las Vegas, Nevada. This item can be shipped to United States, Canada, United Kingdom, Denmark, Romania, Slovakia, Bulgaria, Czech republic, Finland, Hungary, Latvia, Lithuania, Malta, Estonia, Australia, Greece, Portugal, Cyprus, Slovenia, Japan, China, Sweden, South Korea, Indonesia, Taiwan, South africa, Thailand, Belgium, France, Hong Kong, Ireland, Netherlands, Poland, Spain, Italy, Germany, Austria, Bahamas, Israel, Mexico, New Zealand, Philippines, Singapore, Switzerland, Norway, Saudi arabia, Ukraine, United arab emirates, Qatar, Kuwait, Bahrain, Croatia, Malaysia, Brazil, Chile, Colombia, Antigua and barbuda, Aruba, Belize, Dominica, Grenada, Saint kitts and nevis, Saint lucia, Montserrat, Turks and caicos islands, Barbados, Bangladesh, Bermuda, Brunei darussalam, Bolivia, Ecuador, Egypt, French guiana, Guernsey, Gibraltar, Guadeloupe, Iceland, Jersey, Jordan, Cambodia, Cayman islands, Liechtenstein, Sri lanka, Luxembourg, Monaco, Macao, Martinique, Maldives, Nicaragua, Oman, Peru, Pakistan, Paraguay, Reunion, Viet nam, Uruguay, Russian federation.