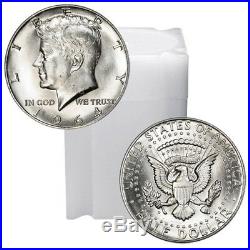 THESE ARE VERY LIMITED OFFERED SILVER ROLLS SO GET YOURS NOW WHILE THEY ARE STILL AVAILABLE! Silver half dollars were common in pocket change until the 1960s, when wise collectors picked them out of circulation and the US Mint eliminated silver from American coinage. They are still prized by both collectors and investors. Highlights of these Coins. Legal tender coinage produced by the US Mint in 1964. Silver was removed from most US coinage the following year; 1965 and later Kennedy halves contain 40% silver. Comprised of 90% silver, 10% copper; each dollar of face value contains about 0.715 troy ounces of silver. 90% silver half dollars are a commonly traded and widely recognized investment product. Since their value is based primarily on silver content rather than collectible value, “junk silver” coins are one of the lowest-premium US Mint products available. The United States Mint produced 90% silver coinage from the 1790s to the 1960s. For most of American history, these coins were commonly encountered in everyday commerce. When silver prices rose due to inflation in the 1960s, the melt value of these coins began to exceed their face value, and wise collectors hoarded them. In 1965, faced with a dearth of circulating coinage, the Mint eliminated silver from most American coins. Today, most coins are made from a copper-nickel alloy and contain no silver. However, circulated 90% silver coins are still traded as an investment product around the world. These coins are sometimes referred to as “junk silver” because they are in circulated condition, but make no mistake: they are a wise investment, indeed. Half dollars are a convenient way to own silver. Each coin contains a little over one-third ounces of pure silver. Should silver ever be used as a means of barter or become part of everyday commerce once again, these half dollars will be common and widely-accepted. Additionally, they are a special part of American numismatic history, as these beautiful coin designs have not been seen in everyday life for over a half century. The Kennedy half dollar replaced the Franklin half dollar shortly after JFK’s assassination in November 1963. The new coins were immediately swallowed up by collectors upon their release in March 1964. By this time, the rising price of silver was driving most silver coinage out of circulation, and despite a huge production run in 1964, these half dollars almost never circulated. To solve the problem, the Johnson administration removed silver from most US coinage for 1965; the silver content of the Kennedy half dollar was reduced to 40%. As a result, 1964 is the only year that 90% Kennedy halves were produced for circulation. These half dollars are packaged in convenient tubes of 20 coins apiece. There is approximately 7.15 troy ounces of pure silver in each tube. These tubes are an affordable and popular way to own low premium silver. Each of these 1964 silver Kennedy Half dollars is available to you today in BU condition. Products in BU condition exhibit no signs of wear and tear, though minor coining flaws are possible such as breaks in the luster, spotted surfaces, and contact marks. Thank you very much for looking at our listings! 7.15 Troy Ounces Per Roll. Coin: 30.6 mm Roll: 30 mm. Coin: 2.2 mm Roll: 49 mm. Track Page Views With. Auctiva’s FREE Counter. The item “20 Coin Roll Lot Of 90% Silver BU 1964 Kennedy $10 FV USA Made Half Dollars” is in sale since Wednesday, July 18, 2018. This item is in the category “Coins & Paper Money\Coins\ US\Half Dollars\Mixed Lots”. The seller is “lspmex” and is located in Texas. This item can be shipped to United States, Canada, United Kingdom, Denmark, Romania, Slovakia, Bulgaria, Czech republic, Finland, Hungary, Latvia, Lithuania, Malta, Estonia, Australia, Greece, Portugal, Cyprus, Slovenia, Japan, China, Sweden, South Korea, Indonesia, Thailand, Belgium, France, Hong Kong, Ireland, Netherlands, Poland, Spain, Italy, Germany, Austria, Bahamas, Israel, Mexico, New Zealand, Singapore, Switzerland, Norway, Saudi arabia, Ukraine, United arab emirates, Qatar, Kuwait, Bahrain, Croatia, Malaysia, Brazil, Chile, Colombia, Bangladesh, Ecuador, Viet nam, Uruguay.